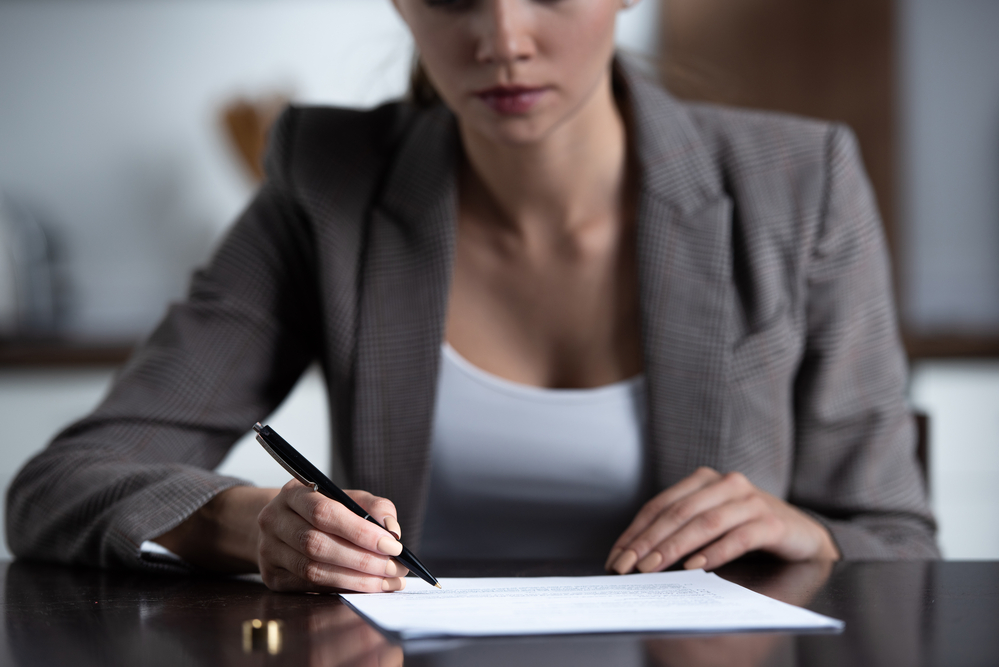 There is almost no way to avoid feeling guilty about divorce once you decide to draw a line in your marriage. Many people still think of divorce as an act of defeat–they consider it their own failure at being a faithful wife or a loving husband.

Marriage was always thought of as a binding contract between two people, but it is becoming less and less binding in today’s world. However, people still find divorce highly shameful and surrounded by irrational convictions and taboos.

Getting married and divorced are not as taboo as they were, but we still see people being forced to stay in unhappy marriages for a myriad of reasons. The stigma attached to getting divorced has to be alleviated.

Divorce is becoming more popular, but divorcees still suffer from shame. It has become difficult to dismiss divorce shame as irrelevant in today’s individualistic culture.

When people accept divorce, why do they still label divorcees as failures? Our article will explain why you shouldn’t feel shame after a divorce and how to handle it.

Public Opinions Regarding Divorce in Mississauga

Many believe that marriage is an equal-opportunity undertaking. In their mind, divorcees don’t know what’s best for them. The situation is different for every divorcee.

Marriage requires two people, but divorce requires only one, so if your partner opposes it, you can’t mend it. They believe that if I could do it, you should too.

Furthermore, they don’t consider the consequences of their persistence and the cost to their families. So long as they maintain the semblance of a stable family, they can hide the extent of their suffering from their consciousness.

In any case, such people are easy to manipulate with tropes like “people used to remain married in the past and they were all fine,” “you need to put more effort in,” “it is just a phase,” “you want too much if you want everything perfect.” Even the most manipulative, “Have you thought about your children?”

Shamers don’t restrain themselves when expressing themselves under a divorce or divorce-related articles. They are willing to provide advice and recommend staying together without knowing anything about a stranger’s life. Whether unintentionally or intentionally, people make judgments about divorce all the time. He’s such a handsome man. “Many wish they had a wife like her!” “She’s a fool to let a man like that go!” How could he be so stupid!” “You were made for each other!” “Get your marriage back on track!” “Don’t be alone!” It goes on and on.

Laughingly suggesting, “Check out this therapist,” “A joint vacation would be better than family law attorney services,” or “We’ve been there.” When people joke that “you’ll get over it,” they are actually hiding their own insecurities. The thought of being alone is unthinkable to them.

Feelings of despair and unhappiness are not something they want to confront. Divorce is viewed as a sign of weakness and an admission of failure.

A person with a strong sense of self-worth can shake off unwanted advice and see past pretenses and hidden sentiments. In contrast, those who are more vulnerable and less confident cannot respond by saying, “You are the one who is disappointed with your marriage but does nothing to fix it,” or “you wish to dampen my aspirations to achieve a better life because you are jealous and fearful.” It is they who encounter stigma.

How Guilt After Divorce Impacts You

The stigmatization of divorced people is well known. Social acceptance can change, and financial and social resources may be limited.

Divorced people sometimes experience discrimination. It is often the case that divorced women cannot rent an apartment because landlords dislike ‘drama’ with ex-husbands and do not believe rent will be paid regularly.

As well as overt discrimination, stereotypes and prejudice can also reveal stigma. Many stigmatizing factors may be present at the same time. Knowing certain stereotypes about divorced people, the individual starts acting out those stereotypes through discrimination against them.

Much of the Stigma Can Be Self-Inflicted

The potential for internalization of stigmatization exists as well. You may see yourself differently as a result of your divorce. Many people going through a divorce start labelling themselves negatively. They think they are the reason for the divorce and that everything that went wrong was their fault. They believe that somehow, they failed the marriage.

Konstam and colleagues interviewed divorced women for a study called “Stigma and Divorce” and discovered that some of them had internalized self-stigma. They hid the fact that they were divorced out of fear that others would publicly shame them. The profiles on dating sites did not mention their divorces, for instance.

There is now no doubt about the importance of personal convictions. When divorced people can internalize stigma despite having never been publicly shamed for being divorced, the best defence is logic.

You should ask yourself these questions if you feel divorce guilt because you believe you failed, or you think you ruined God’s plan for you, or you hurt your family.

Your assumptions will become clearer if you ask yourself questions. In the end, you will see no wrong with an assumption when you peel it to its very core.

If you curse yourself for letting love die in your marriage, ask yourself what is at the heart of your marriage contract. Would you have stayed together even if you no longer loved each other, or did you intend to love each other until the end? Can you believe that you could love someone for the rest of your life? The time has come to dissolve your marriage if you choose not to stay together for love reasons but rather for practical ones.

A compelling argument can also be made for a greater public good. People may honestly believe that society would crumble without marriages. As mentioned earlier, divorce rates are not high enough to threaten society’s stability.

Each conviction is based upon clichés and platitudes as soon as you unravel it. A therapist or yourself can help you shake off the shame and guilt that bound them together.

Talk to a Divorce Lawyer

The one thing that sets people off is the lack of knowledge. You already have a stigma hanging over your head, and you also have to find out the ins and outs of divorce law. That just adds to the burden that you’re already handling. For optimum results, talk to a divorce lawyer in Mississauga who can help you with all legal matters.

Seeking help from a professional therapist can be a proven way to deal with divorce guilt, especially if you are going through a contested divorce. Shame inflicted by oneself is often unconsciously expressed. It means that reflecting on your own self-stigma is difficult. Unconsciously, you will continue to see yourself in a stereotypical and discriminatory light, despite feeling fine and knowing it is okay to divorce. In the end, you are unable to change your behaviour patterns because you feel ashamed and embarrassed about your ‘failed’ marriage. All the details of the divorce are too painful to discuss. Therapists are skilled at reaching the unconscious and helping with internalized stigma. You can perform a self-diagnosis even before or without seeking the help of a therapist. Has your divorce been hidden from others? Does your divorce cause you embarrassment?

Several people admit to feeling ashamed by their divorce and fearing being judged negatively, but they deny that they self-inflict shame. Self-stigma is evident in these symptoms. Having a divorce is not a reason to keep it a secret. No one dictates that you must disclose your divorce to everyone. However, a desire to hide it is often an indication of self-stigma. An experienced therapist can assist you with working through the emotions that come with a divorce without hurting yourself in the process.

Know You Have the Courage

It takes courage to start a divorce. Contrariwise, cultural stereotypes encourage people to stay in unhappy marriages due to shared assets and earnings, children, and religion. Separating and beginning a new life requires a lot of inner strength.

Let go of your regrets and faults. Be kind to yourself. Be thankful for what you have. Don’t let anyone stigmatize your divorce decision. Surround yourself with support and cut off contacts with stigmatizing people.

Going through a divorce is not as taboo as it used to be earlier. But there are still several stigmas attached to it. But you don’t have to go through it alone. Create a network of friends who can support you through it and talk to our professional divorce lawyers who can help you ease through the legal stuff.

How long does it take to get a divorce in Ontario?